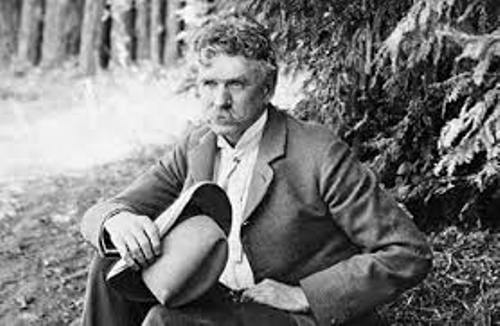 To call Ambrose Bierce a writer would be an understatement. This famous–some might say infamous–author, journalist, solider, and adventurer left a mark on American culture comparable only to the likes of Poe, Lovecraft, Greeley, and Twain.

His Devil’s Dictionary skewered official and media doubletalk a century before the politically correct crowd’s drive to deform language began in earnest.

Perhaps the most fitting capstone to Bierce’s brilliant, stormy life is its dubious end.

Ambrose Bierce was born in 1842 in a log cabin. He had twelve siblings, all of whose names began with the letter A.

Bierce enlisted in the Union Army at the outset of the Civil War, seeing action at Philippi, Shiloh, and Kennesaw Mountain. He enjoyed a distinguished military career marked by citations for courage under fire and recommendations from generals George H. Thomas, Oliver O. Howard, and William T. Sherman.

Yet the war stripped Bierce of all faith in mankind. A brain injury received in the line of duty exacerbated his darkening outlook on life.

Bierce retired from the Army with the brevet rank of Major and took up his pen as a newspaperman in San Francisco. There he wrote a long-running column for notorious media mogul William Randolph Hearst. His scathing satire aroused much controversy, especially a poem published in 1900 which appeared to predict William McKinley’s assassination one year later.

A commensurate literary marvel occurred when Bierce produced the bulk of his short story output in a single torrent lasting from 1888-1891. Largely unappreciated at the time, Bierce’s gloomy, visceral oeuvre of human frailty stands as a bookend to Lovecraft’s body of impersonal cosmic horror. In this light, Lovecraft could be seen as the Plato of American horror and Bierce the Aristotle.

Following the dissolution of a family life as tempestuous and tragic as his military career, Bierce relocated to Washington, D.C. The move would set the stage for the final and most mysterious chapter of his uncanny life.

In 1913 at the age of seventy-one, Bierce left his home in Washington and embarked upon a tour of Civil War battlefields. The story goes that he crossed into Mexico at El Paso and joined up with Pancho Villa to experience the Mexican Revolution firsthand.

If contemporary accounts are to be believed, the experience would prove fatal.

No one knows what happened to Bierce. He was last seen alive in the city of Chihuahua. A final letter, purported by Bierce’s secretary to have been written on the second day of Christmas, 1913, is often quoted as saying, “As to me, I leave here tomorrow for an unknown destination.”

He was never seen again.

Speculation over Bierce’s fate has raged from that day onward. Multiple investigations by American officials produced nebulous results. Those of Villa’s men who cooperated only gave Bierce’s last known location as Chihuahua.

Fr. James Leinert recorded the persistent story told in Coahuila of Bierce’s execution by firing squad in the cemetery at Sierra Mojada.

Skeptic Joe Nickell argues that Bierce never ventured into Mexico at all, citing his worsening asthma, atrophied riding skills, and criticism of Villa. He points out that the letters supposedly establishing Bierce’s presence there have long since been destroyed, and we have only his secretary’s word that they ever existed.

Some say Bierce took his own life. As a staunch agnostic who resolutely denied Christ’s divinity, riding out and shooting himself in a lonely stretch of desert would seem the ultimate logical conclusion of his bleak worldview.

Or, just perhaps, the facetious accounts of Bierce’s prophetic gifts had a ring of truth, and he saw the 20th century coming.

The only certainty is that we’ll never know. Let us content ourselves with enjoying this adaptation of Bierce’s classic “An Occurrence at Owl Creek Bridge” in the great man’s honor.