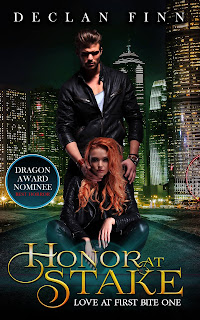 I’ve been going through a lot of old posts lately as I cut them up and turn them into Twitter threads. It’s had some success, and there are people who have never read them before. I might get around to rewriting them here as well. Because there are a lot of things that have changed lately, and some notes I need to stress.


But I noticed I put in a LOT of thought into creating Marco and Amanda for Honor at Stake, et al. Make them polar opposites, yet very similar. How does each one work within the world I’ve made for them. That sort of thing.


It’s odd. Because I tend to put in a TON of thought into character and biography. Probably too much. My original thought of character creation was to make a character, build a whole biography, wind them up, drop them in a situation, then let them wander.

Every book prior to Hell Spawn was a seat of the pants affair.


Then along came Saint Tommy. And I haven’t needed to do anything for him on that scale.


Sure, I do have more background on him in my head, but that’s only come up within the last few books. And I don’t even mean the books that are published yet. Book #8, Hussar, is where I have the germ of an idea for more of Tommy’s background.


When I wrote Hell Spawn, all I knew about Tommy was that he was married with a kid, he was homeschooled, and more or less educated via the Opus Dei. I mentioned that he and his wife had “family out of state.” When I needed someplace to stash Mariel and the kids during Saint Tommy abroad (City of Shadows, Crusader, and Deus Vult), I invented family in Tennessee.

That was the extent of my knowledge of Tommy’s background.


Yes, there is little bits and pieces of Tommy Nolan scattered throughout my books. A character of the same name has appeared in Honor at Stake, and in A Pius Stand, but they are officially not the same person. Silver Empire wants separate IPs. There’s nothing that forbids reader headcanon.


But even if you included his appearances in both of them, there was nothing that really added to the character.


Now, in part, this was done in order to keep down the cast of characters. Hell Spawn was after some reviewers were confused by the cast of The Pius Trilogy, and even the Love at First Bite series spiraled into a sizable cast.

Obviously, if I haven’t written and designed Tommy’s parents, I can’t have him call them for help or advice, or have subplots with them. The same with grandparents or in-laws.

Obviously, this hasn’t worked in the long run. I tried to downplay the existence of everyone else in Hell Spawn as much as was reasonable. Wouldn’t want people to get confused, after all. Then again, it was a first person point of view, how confused could people get?

Reading some of the dumber one star reviews, pretty confused. But those were 100% pure moron, so I don’t feel so bad. But they weren’t confused about characters. So, win!

And yes, after a while, the cast has spiraled. Like everything else in my writing.

Now, all 13 of these people have not yet shown up on the page at the same time, or even in the same book. Thankfully. Yet. I don’t have that planned, either, but we’ll see.

I will note that I’ve had no reviews or comments asking about Tommy’s background. No one. No one cares. In fact, the only person asking for it is my wife, when I mentioned a character idea I was going to use in Hussar, but I postponed for Dark Web. Assuming that Dark Web happens as outlined.

Park of it has been influenced by the Pulp crew I deal with online. In part because, well, we don’t have anything about the Shadow’s background, do we? He used to be a really bad guy, he now kills really bad guys with dual wielding forty-fives.

There’s more than a few other influences about the Shadow as well. But then, I have more than a few characters who can say yes to “Who knows what evil lurks in the hearts of men.” Tommy isn’t technically one of them.

All I’ve really needed from Tommy for his character has been is his acts and his works, as well as his faith. His social life is his family and his church–gun club, soup kitchen, prayer rallies, etc. In Infernal Affairs, his wife is pregnant, so they do get some alone time.

The one thing I’ve had to put work into –and I’ve put work into it–was giving him a flaw. Well, a few flaws. He has a temper. He gets angry. He rarely gives into it, so everyone looks at him like he has three heads when he mentions it.
His confessions are like the following.

“Bless me father for I have sinned, it’s been a week since my last confession.”“Tommy, honestly, what could you have done in a week?”“I cuffed a child molester. I wanted to hit him upside the head.”“Did you?”“No. But I was probably a little rough with the cuffs.”“… Tommy? Take a breath.”

Over time, I do have things that get to him. And his anger is where demons get at him… because the only anger Tommy feels is safe is anger at himself. You can see where that can go wrong.
The solution to these little dark nights is reason and rationality. There was a guilt trip an editor wanted me to inflict on Tommy in book one. My solution? Directly address it as completely irrational from his perspective, because that would have required him to be omniscient.

But hitting him where it hurts means he feels first, and thinks later. Heh heh heh.

It’s odd. I wrote Hell Spawn in late 2017 for release in late 2018, and now I’ve finished book 10, and I’m having trouble thinking back to what everything was like writing book one. I guess it’s good I’m thinking about it while I can.

If you haven’t read Hell Spawn or any of the others yet, now’s a good time to start, because the series is coming to a head.

Or should I say that all Hell is about to break loose?