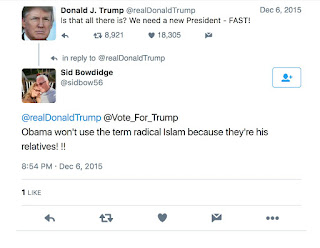 QAnon skeptics may very well be eating crow thanks to new revelations unearthed on the chans that convincingly link early Q posts to a former Department of Energy official.

The IP address where Bowldidge’s tweet originated matches one from poasts allegedly made by Q on 13 March & 8 April of 2017. Even if you think that the mantel has now been take up by LARPers, these posts were from early enough that few ppl new what they were about. Bowdidge was still new to the game & wouldn’t of kown to use VPN or Tor browser to hide his location.

The whole thread is worth reading.

The man that anonymous redditor identifies as a candidate for Q is Sid Bowdidge, a Trump DOE appointee.

President Donald Trump appointed a massage therapist from New Hampshire with no apparent relevant experience to work at the Energy Department, but parted company with the employee Friday after a series of anti-Muslim social media posts came to light, current and former DOE employees tell POLITICO.

Sid Bowdidge had received a nameplate and taken up residence this week in the director’s office of the agency’s Office of Technology Transitions, a career DOE employee said, but it was not clear precisely when he started or what his job would be. OTT specializes in shepherding research developed at the national labs into the private sector, an area in which Bowdidge didn’t seem to have any experience.

DOE employees were unsettled by Bowdidge’s caustic Twitter account, on which he accused then-President Barack Obama of having terrorist “relatives” and spouted anti-Muslim views.

Here’s the whole article. It’s a typical MSM hit piece, but you can easily read between the lines. What clearly happened was that the Swamp whipped up an SJW hate mob against Bowdidge. Some pink-haired hall monitor dug through his social media history and waved his tweet around like a bloody shirt.

The smoking gun in this hit job is the converged media’s cherry picking of Bowdidge’s background. They’d have us believe that the God-Emperor would appoint an unqualified masseuse to a DOE post as a reward for serving his campaign. As always, look at actions, not words. The Deep State was clearly terrified of this guy, so they turned on the heat to get him axed. Sadly, their smear tactics worked.

Another key figure in the Q saga is former Attorney General Jeff Sessions. Q foretold that Sessions would unleash the Storm, and his departure from the administration in November of 2018 shook some MAGApedes’ faith in the Plan.

But Trump has recently made some plays that hint at continued under-the-table support for Sessions and the latter’s ongoing role in the Storm. Though he initially endorsed Session’s opponent for his old Senate seat, the President’s emergency declaration over the coronavirus pandemic has now delayed Alabama’s primary to July 14.

Former U.S. Attorney General Jeff Sessions may have just received a lifeline in his bid to regain the Senate seat that he held for 20 years.

Alabama Gov. Kay Ivey on Wednesday postponed the state’s scheduled March 31 primary runoff until July 14 because of the coronavirus. The early betting is that, however unintentionally, the postponement gives Sessions a greater chance to win his race against former Auburn University football coach Tommy Tuberville.

Some Trump supporters have denounced Corona-chan as a media-generated panic devised to thwart the Trumpslide. But the timely boost to Sessions’ Senate run suggests another motive behind Trump’s quarantine.

You’re an outsider politician elected to clean up a rotten system, but that system keeps leaning on your guys to drive them out of town. How long would it take you to get wise and use their predictable playbook against them? Probably not long, and Trump is smarter than the average bear.

If the bad guys keep taking your guys out of key positions, you bypass the system entirely and keep your people working behind the scenes while the enemy’s preoccupied with the usual kabuki theater. Then you declare a national emergency to give your field guys cover, and BAM. The trap snaps shut.

“But Sessions is no longer law enforcement and has no official power!” If you thank such paltry technicalities can stop him, you’re woefully ignorant of the law. Anyone can effect a citizen’s arrest, and that includes Sessions. Don’t be surprised to see him publicly cuffing Tom Hanks on July 13–just in time to secure a landslide primary victory. Then he’s back in the Senate and back on the Judiciary Committee. New York, DC, and LA should be on National Guard lock down right on time for  those 10,000 indictments get unsealed.

That brings us back to Bowdidge. It’s not beyond the pale to surmise that the whole “unqualified masseuse canned for inflammatory tweets” canard was classic 4D chess. Could it be a coincidence that the Q posts start three days after Bowdidge’s “firing”? Possibly, but I wouldn’t bet on those odds.

We are through the looking glass, and it shows a Storm on the horizon.