Whats New
Evidently our little project to reclaim Generation Y from the Madison Avenue Boomer memory hole is gaining some traction in the wild. 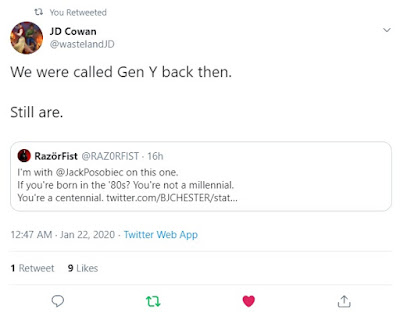 Millennials do not remember the pre-internet, pre-9/11 world. By and large, they celebrate the cultural apocalypse of Clown World as the first generation to be fully indoctrinated at school to believe that tradition is bad. 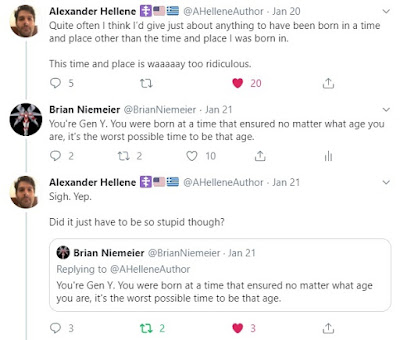 And whereas Millennials’ generational vice is extractive self-centeredness, Gen Y copes with their grief by retreating into an inner world of nostalgia and neglecting harsh reality. 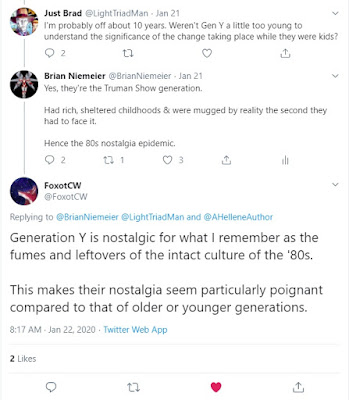 Boomers got the whole buffet. Jonesers got dessert. Xers got the last dry, rubbery chicken breasts. Ys got fumes and leftovers.

Critics of my generational theory have objected that it’s a self-indulgent attempt to arbitrarily separate younger Xers and older Millennials from two generations they don’t like. The result, they accuse, is a generation which conveniently happens to be “better” than the preceding and succeeding cohorts.

Nobody who’s read my posts honestly would reach that conclusion. I’ve never argued that Gen Y is somehow superior to Gen X or the Millennials. In one key way, Ys are demonstrably worse. It is malignant Gen Y nostalgia that drives the hollowed out Hollywood franchises and helps spread Pop Cult agitprop worldwide.