A number of readers have asked me to explain my frequent editing advice against writing by playing a movie in your head and transcribing what you see.

To complement the inherent advantages the novel has over film as a storytelling form, here are a few proscriptive reasons to avoid approaching novel writing like screenwriting.

This is an oversight that pops up again and again in new authors’ manuscripts. Almost all of the setting and character descriptions will be visual.

When you consider that a novel can convey information from every sense, limiting yourself to visual details only leaves a wealth of sound, scent, texture, and even taste sensations on the table.

Immerse your readers in a vivid world. Include at least one detail from a sense other than vision in every description of a new setting, object, or character.

This rookie mistake is a telltale sign of a writer transcribing a head movie.

Avoid this mistake. Keep your readers engaged. Set the scene so the reader clearly understands where every character is in relation to the other combatants and the setting. Then paint the action in bold, broad strokes. Start with short sentences. Steadily build up to longer ones.

You could also substitute Kevin Smith or Quentin Tarantino dialogue. This literary misstep is less a result of transcribing head movies than of having movies as your major influences instead of novels.

What is Joss Whedon dialogue? It’s try-hard edgy, painfully hip, and snarky to a fault. You’ll know it when you encounter it. So will your readers.

The equal and opposite error is trying to write dialogue that “sounds real”.

Writing effective novel dialogue is a balancing act. It should neither be so snappy as to remind the audience they’re reading fiction nor so “realistic” as to bore or confuse them.

Read the transcript of a podcast or YouTube video sometime. Most people are just plain bad verbal communicators. Almost everybody uses lots of vocalized pauses, repetition, and clunky phrasing that we’re so used to hearing as to gloss over it.

Novel dialogue should be the “best of” real speech. Imagine if you could hire a professional writer to come up with the perfect comebacks for you to use when someone cuts you off in traffic.

Your characters do have a professional writing for them, and it’s you. Proceed accordingly.

How do you learn to write good novel dialogue? There’s on one way. You have to read novels by authors who write good dialogue. Accept no substitutions!

You can start with the award-winning prose of my thrilling Soul Cycle! 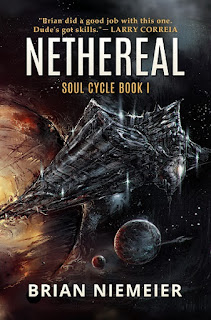