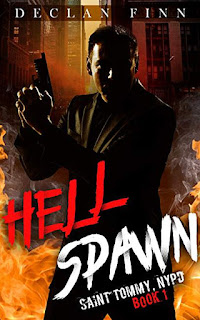 Maybe it’s a result of too many Marvel  movies, but I view Hell Spawn, the first in Finn’s Saint Tommy, NYPD series, as essentially a superhero origin story. In the first action scene, Detective Tom Nolan discovers an ability he can’t explain; his powers unfold at various points throughout the story; and the climax has him performing feats which would not be out of place in the next comics-based blockbuster.

However, I suppose the story is more properly classified as urban fantasy since the meat of the plot centers around a police investigation of a particularly nasty serial killer, and the story, while sprinkled withe a generous dose of the other-wordly, is firmly grounded in our time and place.

In other hands, the tone of the story could have turned intolerably dark, what with the gruesome murder of a child, the unrelenting stream of violence and the general feeling of evil presence gathering ever closer to the protagonist and those near and dear to him. What makes all the difference in this case is the setting, or rather its idealized version.

Seen through the eyes of the protagonist whose life has been dedicated to serving his community, we see New York City as a home to people who are decent, loving, loyal, and doing their best to make it in a harsh and imperfect word. Early on, Tom makes a point that even the criminals he encounters and arrests as part of his duties are generally good people who simply made the wrong choices and are capable of being reformed and rehabilitated.

The author is likely to catch flak for choosing two “outsider” groups, rather than native New Yorkers, to be the focal points of entry for the Big Bad. One of those is the real-life Mexican gang known as MI-13, and the other a national organization whose name is clear to anyone paying even marginal attention. As a narrative tool, though, this setup serves a purpose of creating an image of a city under siege from the forces of darkness which cannot be defeated by conventional means.

To put it simply, New York City of this novel is a community which is capable of producing a Saint, and in desperate need of one. We don’t know why or how Tom Nolan gets picked for the job, but he accepts it whole-heartedly, which in itself tells us he must be the right choice.

From the title and the clear Catholic orientation of the novel, one might expect numerous pauses for theological discussions and explanation, but that’s not the case. The required information comes to us in pithy chunks, never interfering with the pace or the steadily building tension leading to the climax. Ironically, the only time the story lagged for me is during a prolonged series of fights between Tommy and a large number of … let’s just call them the bad guys, to avoid spoilers. This probably would’ve worked better in a movie, where we could see and appreciate the graphic, intricately choreographed brawl rather than reading the blow-by-blow description. Perhaps having been spoiled by the fast pace of the book, I did not wish to slow down for anything, not even to enjoy seeing the hordes of baddies beat up over the span of several pages.

That minor criticism aside, the final confrontation with the Big Bad was fantastic, and as should be expected from the first novel in a series of many, left us with just enough of a resolution to want more. There are questions about both the nature of the upcoming threat(s) and about the extent on Tommy’s current and potential powers. I’m looking forward to seeing where the story goes from here, but for now I unreservedly recommend Hell Spawn as a solid start.