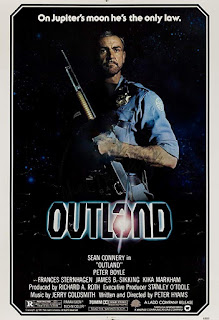 Some time ago, I read an article by a publisher of a sci-fi review magazine where he offered the following test to determine if a story qualifies as proper science fiction:

Can the story take a place on a bus rather than on a space ship without being fundamentally different?
Outland, an obscure movie starring Sean Connery at the low point of his career, cannot be set on a bus, but it most definitely did not need to be placed in space. It is, no pun intended, fully grounded in the traditional western genre in the theme, plot and pacing. There are even shotguns. Lots of shotguns. In a pressurized environment. All that’s missing is the tumbleweeds. We do get treated to the sight of some gyrating balls of… something, but the less said of those the better.

The first part of Outland has all the promise of a Clint Eastwood flick. A stranger (Marshal O’Neil) comes to a small town (an mining space colony) administered by the corrupt (a skivvy manager and a group of “we-just-work-here” support personnel) for the wealthy (a corporate conglomerate). Then, after a brief flirting with a medical mystery, it pivots into an unabashed homage to High Noon and stays there to the extent that the viewer can predict nearly every beat. In fact there is a small twist towards the end that had me thinking, “Wait, that’s not how it goes in High Noon!”As someone who believes that execution trumps originality every time, I don’t offer this as a criticism but as a straightforward observation.

What is truly remarkable about the movie is just how much it is carried by the actors. Only two actors, to be precise. Sean Connery not so much steals every scene he’s in as walks off with it unopposed. It was a treat for me as a fan to see him shine in a non-iconic role, making the most of a middling script and minimal character background.

Frances Sternhagen as Dr. Lazarus makes a respectable showing as a hard, cynical, plain-looking woman who does not get any softer or more attractive as the story goes on. What she does get, however, is a character arc and a few tense action scenes, which is just enough to make her memorable in an otherwise forgettable supporting cast.

The tale is not so much a battle of good vs evil, although there are clearly the good and the bad guys. O’Neil is not seeking to bring down the system (it’s impossible) or even to save the colonists from what appears to be a mystery epidemic (they are not presented as particularly worth saving, much like the town denizens in High Noon). He, and to some degree Dr. Lazarus as well, want something more fundamental: the ability to look in the mirror and not turn away in disgust. In this case, it means doing the right thing and paying the price even if no one knows, and if it makes no difference to the harsh, uncaring, corrupt world in which they live.

In the image-obsessed modern world, where companies no longer advertise their social responsibility instead of products, and individuals measure their self-worth in the numbers of followers or likes, the idea of wanting to achieve SELF-respect might sound foreign. And that is the reason Outland, for all its flaws, is worth watching.