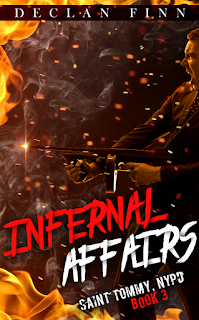 I’m tough on my characters.

I’ve killed friends of his children.

I’ve put him in the hospital three times.

He’s been shot, stabbed, impaled, and beaten into the pavement ….

And that’s just book one.

This book, well, it’s time to see what Tommy can take.

Because this time, we’re going to try to make him a saint.

By hook or by crook.

Welcome to Chapter 1 of Infernal Affairs.

Chapter 1: Martyr and Saint
Martyr —
a title in the Catholic Church for saints who died for their faith.
One that I never expected to have.

As I sat in the front row, side
seat of my church, Saint Gregory the Great, it only occurred to me
that at least the former title would be slapped upon my tombstone
when the bullets started to fly.

Father Jerome Delany, the
celebrant, was the first to be shot. The sharp crack
of the rifle echoed through as he started to talk about how God was
and is Love. He shuddered
with the impact as the five bullets punched into his chest. He fell
back with the last bullet, which was impressive for a man as old as
he had been.
My family and I were seated to
the right of the altar as you faced the altar. We were less
interested in being seen in the front and more interested in being in
a position to drown out the guitarist on the other side of the altar
from us with our singing. We weren’t good, but we were mildly in
tune, unlike the guitar, or the cantor.
I was with Mariel, my wife, and
Jeremy, my son. Mariel had long, wavy chestnut brown hair, round,
deep-brown eyes, a pleasant heart-shaped face, and a healthy olive
complexion. As Ben Franklin would say, we fit well together. Jeremy
was eleven, energetic, and …
very much an 11-year-old boy.
When the first shot went off, I
dropped to one knee and reached for my handgun. My wife Mariel bent
over to protect our unborn daughter. Our son Jeremy crouched so low
he was nearly under the seats. “Plan 22 C,” I said.
Both of them nodded. Ever since
the serial killer had broken into our home, we had come up with a
collection of contingency plans.

Plan C was always “run while I
lay down cover fire.”
Before they could even get off
the floor, I jumped onto the back of the chair in front of me. It
tilted forward and I jumped onto the next chair before it fell
forward, and I leaped to the small rail for climbing up on the altar
— it had been installed for those who couldn’t do steps without
holding onto something – and then took a giant leap to the center.
I went for the top of the altar
for multiple reason: first, visibility, and second, I wanted to be
the biggest, clearest target. Thank God none of the paraphernalia for
later in Mass was there yet.
The shooter was at the back of
the church, rifle held high. Since the first shot, everyone in the
church stood and ran. Few had ducked to cover, -along with those who
had merely tripped those trying to run.
And half the church had run
directly into the center aisle, in front of the shooters.
I dropped to one knee, gun up and
ready. I grabbed the microphone from the altar and bellowed, “Freeze!
Police!”
The rifle man turned, and swung
his muzzle up to aim for me.
I aimed high and fired. The first
bullet scraped along the barrel of the rifle, catching the ejector,
and drilling into his shoulder. It turned him around before a round
went off. He nearly decapitated a statue of the Virgin Mary. The
second bullet struck up just right of center mass (his right, not
mine). My third bullet missed by a hair, scoring him across the
forehead.
The shooter’s rifle came down.
He staggered back and grabbed his arm. He slumped up against the side
of a pew, grabbed his rifle with his good hand, and raised the barrel
to aim again.

I fired again, catching him in
the breast, right beneath the clavicle. He leaned straight back this
time, and went down.

The only way to get to him would
have been through the horde of church goers. I frowned, thought it
over a moment, and prayed a little.
I pushed forward in a leap …
that was aided by a little divine intervention. The levitation trick
that I prayed for was just enough to leap from the altar to the front
pew. I leaped from the back of the pew to the one behind it. I leaped
from one pew to another, looking like a parkour runner. I wasn’t
thinking at the time, giving only a brief thought to how I would
explain this if anyone had noticed -God’s little parlor trick.
I leaped off once the crowd had
petered out, landing in the aisle.

This also put me in direct line
of sight of the shooter.
The muzzle came up a few inches
and pulled the trigger.

It clicked.
The shooter looked as confused as
I felt. I lunged forward and kicked the rifle away from him. The
rifle had been damaged. My first bullet jammed the ejector, and the
last spent casing did not eject.
The shooter was a walking
cliché: socialist, hammer and sickle badge, Che Guevara shirt.

The shooter smiled at me and
laughed. “Almost got you, you capitalist pig. You won’t be lucky
next time.”
There was a burst of bullets from
outside. My head shot up. The automatic gunfire was unlike the
shooter I just dropped. I darted out of the back of the vestibule
(away from the altar), then through the front door of the church.
Outside the church was empty of
people. Since I didn’t trust to locate the gunfire by sound alone
(directionality of sound can be a pain in the butt), I turned right.
Because there had been an active shooter in the church, and no one
had appeared from the nearby police car parked near the entrance
behind the altar side of the church.
I turned around the corner. Four
men with M4 rifles were hosing down the three men crouched behind the
patrol car. I charged the gunmen. They didn’t turn. I was within
thirty feet of them when I opened fire. I emptied the magazine into
two of the shooters.

The empty magazine ejected from
the pistol as I came within arm’s reach of the remaining two
shooters. I hammered my pistol behind the ear of the shooter on the
left. His head bounced off the rear windshield he was hiding behind.
A second later, I crashed into the shooter on the right. I crushed
the shooter between my shoulder and the side of an SUV. I drove my
elbow into the shooter’s ear, and then pistol-whipped him. I went
back and forth with my pistol, smacking it against the skull of each
gunman in turn until they fell down.
I kicked aside the gunmen’s
weapons, reloaded my pistol, then took two steps back, covering
them. I called out, “Clear! NYPD! Plain clothes!”
Why didn’t they even
consider sending in more than one guy to the church? Because I’m
one guy going to Mass versus being ambushed by two armed cops. Duh.
Continue reading here.