And after some break, the retrospective is back! There are a couple of reasons for this, but the main one is that I had spent a ton of time writing a highly researched and detailed review and history of “Nausicaa”…which got deleted when I clicked on “Publish”, my internet apparently having died. This sapped my enthusiasm for awhile, but I’m ready to give it another go.

I guess it’s just as well. The original article was probably more of a history lesson than a review, which is interesting in its own right but really isn’t what the retrospective was supposed to be about. That said, “Nausicaa” was such an influential film that the background needs to at least be touched on briefly.

At the time “Nausicaa” was created there was no Studio Ghibli, and officially “Nausicaa” is not a Studio Ghibli film. “Nausicaa” was essentially an experiment to see if creating a new studio under the leadership of Miyazaki and Toshio Suzuki, his producer, was a viable idea. Miyazaki himself was already fairly well known at the time. He only had one movie under his belt, true, and it didn’t do very well (“The Castle of Cagliostro” has since been remembered as a minor classic itself, and I intend to get to it next), but he had a lot of experience directing in several different anime shows. So he wasn’t exactly an unknown commodity.

Nevertheless a new studio – especially a studio that aspired to the consistently high quality seen in a Studio Ghibli film – is no small thing to bring about. So “Nausicaa” was created to convince people that it would be a good idea. And, thankfully for fans of anime, “Nausicaa” was a smash hit and almost immediately declared a classic, and has since been retroactively folded into the Studio Ghibli canon.

Right. A very brief history. So how does “Nausicaa of the Valley of the Wind” stack up today?

The big problem with “Nausicaa” really isn’t “Nausicaa’s” fault. It’s that Miyazaki looked at “Nausicaa” again, didn’t like what he saw, and then decided to make a better version. That better version is “Princess Mononoke”, a movie that is a serious contender for greatest animated movie of all time and one of the greatest epic films ever made. And in comparison, it becomes more and more clear where “Nausicaa” fell short.

Though honestly, it’s hard to even say it “fell short” of anything. More like, what it did worked pretty well, and what “Mononoke” did worked even better.

In “Nausicaa of the Valley of the Wind”, the pro-environmental message is straightforward and heavy-handed: Humans who destroy the environment are bad. Humans polluted the earth and are terrible. There’s no subtlety.

Is this actually an issue with the movie? Well…not really? It gives us a clear hero and villain, and honestly, who can argue with “Don’t turn the earth into a toxic wasteland”?

But THEN we look at Mononoke, and how that town that’s supposedly destroying the environment is barely surviving in the middle of the wilderness, made up of outcasts who have banded together to form a struggling community, fighting against forest gods who are no saints themselves and who kill hunters, who need to find a way to get food for their wives and children…

…And all of a sudden “Nausicaa’s” view of the world looks terribly simplistic in comparison.

Similarly, the main villain in “Nausicaa” is mustache-twirlingly evil. Miyazaki gives her just enough of an argument not to make her a cardboard cutout, and there are some light attempts to justify her actions, but the things she does to the people of Nausicaa’s valley make her completely unsympathetic. Contrast her with Lady Eboshi, one of Miyazaki’s best characters, a complex and nuanced portrayal of a strong, compassionate, but icily cold-blooded and ruthless leader, willing to destroy whoever gets in her way and do terrible things in order to accomplish her goals. Her sympathetic portrayal contrasts strongly with the villain of “Nausicaa” (it doesn’t hurt that Lady Eboshi gets some of the best lines of any Miyazaki film – “I’m getting tired of hearing about that arm of yours. I think it’s time I cut it off!”).

This extends further, also encompassing Miyazaki’s attitude towards war and weaponry. Basically, any time “Nausicaa” and “Mononoke” attempt to tackle the same or similar themes, topics, or characters, “Nausicaa” does very well and “Mononoke” does outstanding. This makes “Nausicaa” look something like a testing ground for ideas that were utilized more effectively in “Mononoke”.

Of course, this is highly unfair to the film, which – as I stated – was very good in its own right. It does mean, though, that the most interesting parts of the film are where it diverges most clearly from “Mononoke”: The world-building and the character of Nausicaa herself. Miyazaki’s view of earth and the Valley of the Wind is a fascinating one, and there is a mid-film twist about the purpose of the poison forest that is genuinely surprising. It’s hard to really explain what makes it so fascinating without actually seeing it, of course: 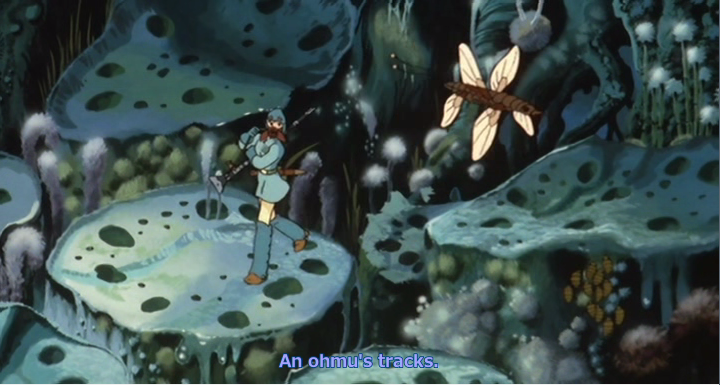 “Princess Mononoke” has some amazing imagery, but nothing as fascinating and engrossing as the poison forests of “Nausicaa”.

Nausicaa herself is an enchanting character, at once brave, active, and very, very feminine. I thought it a misstep early on in the film when Nausicaa went toe to toe with the male soldiers attacking her – she is clearly not a very large or strong woman – and it’s something Miyazaki really never did again (Lady Eboshi and San from “Mononoke” have something different going on entirely), either in the movie or in his overall body of work. Outside of that, though, Nausicaa’s strength is of a distinctly feminine bent; she can charm animals with a smile and touch, her kindness wins her the love and devotion of her people, and she is utterly fearless in the face of danger, throwing herself in front of gunfire multiple times. She ultimately ends up saving the day not through traditional male-oriented action heroics but by asking for forgiveness and mercy on behalf of her people. Nausicaa is one of Miyazaki’s most fun and likable characters, and as great as some of the characters in “Mononoke” our protagonist is certainly not as compelling.

Is “Nausicaa” one of Miyazaki’s best films?