The controversy over The Corroding Empire just gets stranger and stranger.

First it was thought that the book had been pulled at the behest of Tor Books, publisher of The Collapsing Empire.

However, details emerged last night that neither Tor, Scalzi, nor Amazon per se were to blame for The Corroding Empire’s publication delays. Castalia House Lead Editor Vox Day explained:

UPDATE: Since some people seem to want to go on the warpath, let me be perfectly clear here: Amazon is not to blame. I even suspect that it is entirely possible that Tor Books is not to blame either, based on a) when the book was pulled and b) the fact that the book has shown as Live for nearly 24 hours but still does not have a page on any Amazon site. The most likely scenario, in my opinion, is a rogue low-level SJW employee, possibly two, in a specific department.

I have already spoken to the manager of one department and they have begun to investigate why Corrosion is Live but not available. They’ve done everything we asked and we have no problem with the way we have been treated.

As we suspected, there appear to have been internal shenanigans taking place at Amazon, as one or more SJWs appear to have abused their positions to interfere with our ability to sell THE CORRODING EMPIRE.

We’re still working with Amazon to sort out exactly who was responsible for precisely what, and to establish what, if anything, legitimately needed to be changed according to their guidelines. This should all be nailed down by the end of the day, but in the meantime, you can now order the book and post reviews again.

The Corroding Empire isn’t out of the woods yet, because following that conversation, it was blocked again, reinstated again and blocked a third time in short order. 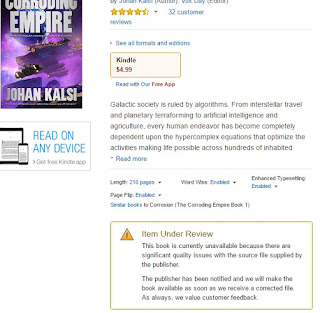 Here is where the matter stands as of this writing:

UPDATE: Finally got to speak to a supervisor. She’s not only escalated the matter to legal, but has assured me that the book will be unblocked, stay unblocked, and that the matter will be fully investigated. It’s not just the three blocks, the culprit(s) also put the book on the Excluded list for Amazon Associates, which prevents others from being paid when someone buys the book.

The publisher insists that the issue is with rogue elements within KDP quality control and not with Amazon itself. If so, we could be witnessing a civil war within the world’s largest book distributor. However the situation gets sorted out, the resolution should be informative for publishers, authors, and readers alike.